Another bright and early start, you can tell this blog is about the British as we keep on starting it off talking about the weather!

Today we travelled out to Kew Gardens to access the extensive collection of files at the National Archives. The records go as far back as to feature the very first Doomsday Book in the late 13th-century! You can read more about that (here) if you like.

We however, are only interested in one specific period of time, that being the First World War.

After registration, a mandatory process as we were to be handling historical and valuable papers, we began to search for documents that might be of interest of us. By using the National Archives’ search engine ‘Discovery’, we managed to find several documents, which we then put in a request to take a closer look at. If you’ve never visited the National Archives, the way it works, is you have to order/request the object that you are interested in and it will be sent up to you within 40 minutes; a bit like a restaurant! The objects available to view in the archive can vary from something as slight as a piece of paper or single photograph, to massive volumes as large as a telephone directory.

All of us broke off into smaller groups to peruse our respective papers. I was personally interested in the widows’ pension regarding coloured soldiers and a correspondence between the Colonial Office concerning expatriate matters of coloured seamen.

The first item, was a letter petitioning the rights of the wives of coloured soldiers in the West Indies. The document itself was hard to discern due to the age of the document and the irregular handwriting it contained; but to give you a general idea, the two images you see below are two letters. One is a request to draw the attention of the Army Council to the exclusion of pensions to the widows of coloured soldiers; and the second is the response. 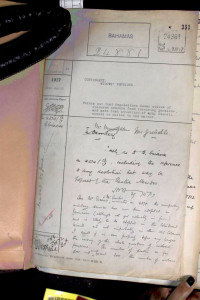 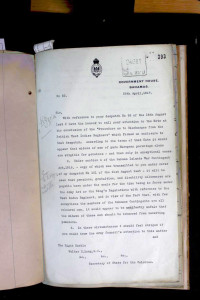 The general gist of the documents is that the issue is of some relevance, yet not of urgent importance, the authors do not come across as particularly concerned.

The second group documents that I came across, involved issues regarding ‘coloured’ seamen. The first document was a letter from an individual appealing to the Colonial Office, to deport a certain coloured seaman. The views of the author were rather strong. He asked for the deportation of an individual who had arrived in London without official papers, and according to him, shouldn’t be trusted. He then lists the man’s various faults, stating how he had supposedly embezzled the empire’s money and should be removed right away.

The second set of letters detailed a situation that involved a group of seamen who were shipped to the West Indies by mistake. The exchange of letters were concerned with whether or not these seamen were to be paid during the time it took to get them back. The correspondence sought to find a way to ship them back that would cause little or no cost to the empire. These two particular selections of documents caught my interest (especially the first collection), as coloured soldiers that were rejects of the colonial Office had no one else to turn to but a charity called The Coloured Men’s Institute founded by Kamal Chunchie, one of the ‘Hidden Heroes’ at the heart of this project. Although there is a possibility the two men never crossed paths, it is his predicament that Chunchie’s organisation had specialised in. 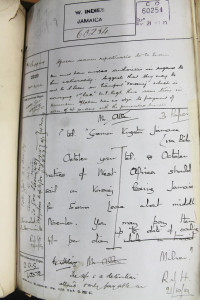 The others in the group looked at other items; take a look at our blog to see their views on their findings.

Subsequent to reviewing these files, I became aware of the choice of language used by the black servicemen when addressing the Colonial Office. Their manner was self-demeaning to say the least and it dismays me how it was an actual norm for non-white soldiers to talk to there so called betters in this undignified way; which reinforces the work me and my team are doing and how important it is that their stories are told.

After a quick lunch we went back upstairs and burrowed ourselves in the past once more.

If you have been following this blog you may remember previously from our visit to the National Army Museum, that we had managed to acquire a list of names by browsing their photographic library. Throughout the afternoon we entered their names in to the ‘Discovery’ search engine and we were able to pull up their medal certificates. From the information featured on the certificates we were able to obtain basic information such as dates of birth, and from there,  able to search for descendants via Ancestry.

I personally thought it had been a very productive day; we left the National Archives building with lots of new source material, pictures and copies of documents. We are all now very eager to begin piecing everything together, which you should expect to see on here very soon.

I hope this post has given you some insight into our experience, but for the full experience, I urge you to pay a visit to the National Archives yourselves.

I will be back at the beginning of the next year and  we at Hidden Heroes wish you all a Merry Christmas and a happy New year!

Writer and Content manager for Heroes from the Empire.

National Army Photography Trip Ten Heads Are Better Than One