Our Mission: To uncover the hidden soldiers of the Middlesex regiment of World War I

Ok so what really happened wasn’t as action packed as that themed mission statement may imply, but it was in fact, equally as interesting!

Bright and early on the 24th, a group of us headed off to Stevenage to access the National Army Museum’s photo library. We were hoping to discover more soldiers to add to our project and hoped that by delving through their vast photographic archive we would be able to uncover more stories.

The National Army Museum is currently undertaking a redevelopment project called ‘Building for the Future’, so this meant that instead of visiting them in their custom headquarters in Chelsea, we all got cosy in a far less grand reading room in Stevenage. Armed with magnifying glasses, we began to scan old photographs. 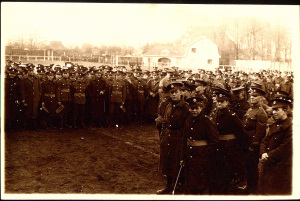 As you are likely aware, we are looking for soldiers of ethnic minority backgrounds, so our task at that point was to simply examination the photographs in the archive and scope for any soldiers that appeared to be of an alternative heritage. The next step would then be to find out more information of the individual by tracing the picture to the regiment and battalion. I say simple, but it was far from it! It was the epitome of a needle in a haystack.

After several hours and many faces later, we struck gold!

We came across two pictures, one depicting the Middlesex Regiment (Duke of Cambridge’s Own) holding a black cat as their mascot. The second depicted a different battalion of the same regiment, but this time, with a black soldier: Drummer Roberts from Trinidad towering over his peers. 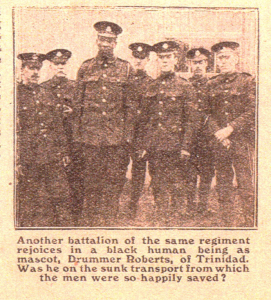 The second battalion “rejoices in a black human being as mascot”

The shocking language used to describe these soldiers in the captions attached to the photographs, perhaps indicates to the underlying socio-cultural attitudes that lead to these stories remaining hidden from a mainstream historical narrative.

During the afternoon we managed to collate a list of definite potential candidates, and a larger quantity of maybes. I say maybes because some soldiers’ appearance did look different from the sea of white faces, but it was hard to tell if their darker complexion was naturally dark, or if they were in fact simply covered in mud.

We managed to take a few documentary photos of our visit that might help give you a clearer image of what we were up to. Thanks goes out to Alistair and his team at the National Army Museum! 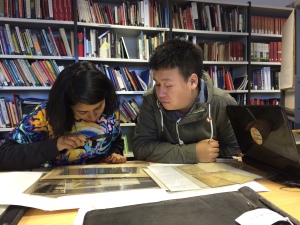 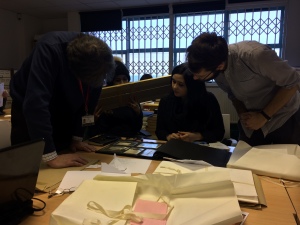 We remain optimistic! Our next trip will take us to the National Archives where we feel sure that we will be putting our new list of names to good use. We are also hoping to uncover even more soldiers and to discover their stories.This is where I sign out, and will check in again soon to report on our findings at the National Archives!

Writer and Content manager for Heroes from the Empire.