So far during this project, we have been on numerous trips to gather more research for our outputs about the hidden heroes of the Middlesex Regiment from the First World War. It is a fascinating experience, having the chance to uncover the identities, photographs and experiences of soldiers who were beforehand unknown and unrecognised, and being able to finally tell their stories.

Our first trip was to the National Army Museum in Stevenage, where we looked through archives of photographs and newspaper articles for likely Commonwealth soldiers. The artefacts I examined were various photographs of soldiers, including a whole album with 62 photos. These featured soldiers involved in various military events such as during street parades, military funerals, trophy ceremonies and formal photographs. Although the photos had become a little faded and discoloured with age, it was fascinating seeing the soldiers visually brought to life.

More recently we went to The National Archives in Kew, to find some more information about Middlesex and British West Indies Regiment soldiers to include in our projects. We had to take precautions while using the artefacts we used for research, including using foam blocks to support books and weights to hold open pages to preserve them.

The work was very independent, searching for what you wanted, collecting and reading through it, taking photos using the camera facilities and returning the records all yourself. Both the records I looked at were heavy books consisting of a multitude of documents about certain issues at the time.

The first piece of research I read was “African seamen repatriated to W. Indies”, about whether these seamen should be paid because they “must have misled authorities, in regards to their nationalities”. There were 3 from Sierra Leone – Henry William, Samuel Nichol, Thomas William; 1 from Gold Coast – Joseph Johnson; and 4 from Nigeria – Frank Smith, David Hunter, James Lilly, Joseph Nichol. 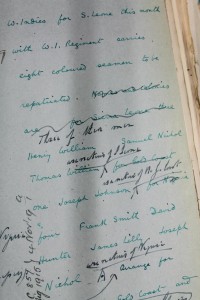 In the end it was agreed that 4/- (shillings) should be paid to them up until the day of their embarkation. It was disheartening to read that they did not want these soldiers because of their nationality, although there was a positive outcome through it being agreed that they were still be paid for their services.

The second piece of research was about “West Indian Negroes in British Regiments”, which “called attention to and suggests they should be demobilised at once”. It consisted of a collection of documents with discussions about the returning of these soldiers to the West Indies, which I found a little harrowing to read. There was a greatly negative exchange about the soldiers in these documents because of their origins, including angry criticism of the man who recruited them in the first place.

It was great to experience being able to access some of the many important documents and artefacts stored there, conducting first-hand research and finding detailed research and documents to enhance our projects. What with the reading room being nearly silent and many pages of research to read through, it was easy to lose myself in these written words from the First World War.